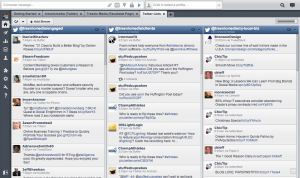 If you are growing your online presence, particularly on Twitter, then you are probably starting to feel a little overwhelmed by your default Twitter news feed. Once you reach the triple digit mark of people you follow on Twitter, it’s easy to lose sight of valuable information that’s being posted by people you really want to keep up with.

Twitter lists are the solution to keeping your Twitter feed manageable and the information usable. If you aren’t familiar with Twitter lists yet, this is some extremely valuable and actionable advice: start using them right now! The sooner you start segmenting the people you follow on Twitter the easier it will be to maintain. Imagine needing to go through a list of a thousand Tweeps and moving them all around to different lists? That’s is far too daunting a task to be tackled by any sane human.

You can actually create a Twitter list when you go to add the first person, so you can kill two birds (get it?) with one stone here. If you want to know what kind of categories you should create as lists, check out my article on Business2Community on the 6 Twitter Lists Every Business Should Have.

To get started with adding people to your Twitter lists:

And there you have it, that’s how you set up Twitter lists. Easy, right?

Now that you have your lists set up in Twitter, the easiest way to manage them all is with a program or app that has a columned layout. This way you can easily scroll through your lists and interact with your Twitter connections all in one dashboard.

HootSuite is a free Twitter tool that I’ve talked about before and will most likely talk about again. In HootSuite, you can set up a Twitter Tab in your account. When you do this, it will automatically add a few columns (which they call streams in HootSuite) for your home feed, mentions, direct messages and sent tweets. Those are all well and good, but we want to have a tab for columns of just our Twitter lists.

You can create a new tab from the getting started page. 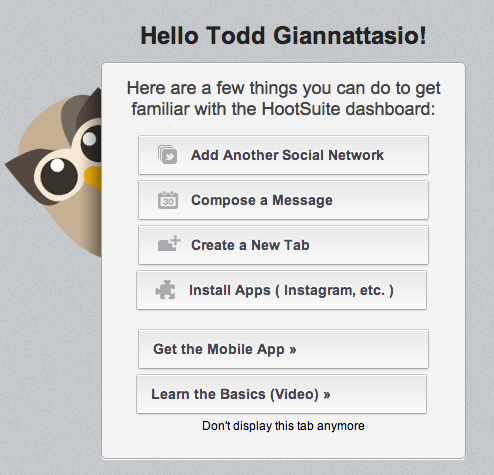 In the new tab, you can then add a new stream. When the dialogue box pops up for your new stream, you can click on the tab that says Lists and choose a Twitter list. Continue to add streams to this Lists tab in your HootSuite dashboard. 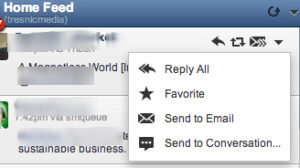 From right in the column, you can Tweet back to that person, retweet them or send them a direct message, just like from the standard Twitter site or app.

HootSuite also offers a mobile app for when you are away from the computer and want to manage your account.

Do You Use HootSuite To Manage Your Twitter Lists?

Nicely written guide Todd! Lists are the single most underused feature of not only HootSuite, but Twitter in general. They are so powerful for listening and segmenting your contacts. Home feeds are archaic. I deleted mine long ago.

Lists are quickly becoming the the answer for the savvy users.

Thanks for the kind words about HootSuite and the valuable article,

-Connor and your friends at HootSuite

Thanks, Connor! Segmenting your contacts in all aspects is certainly underused and when you’re talking about managing information consumption like in Twitter, your comment hits the nail right on the head. Once you follow more than a few dozen people even, it’s too much for any sane person to be able to read through everything and find value in the network. Thanks for the comment and the great Twitter tool!

[…] Consider creating a few Twitter Lists to help you segment out people who are more well-known than you are, but achieving their level of success is realistic for you in the near to medium future. This way you can easily keep up with information that they are sharing, retweet things you also find valuable and show them you are helping promote their brand as well. Reciprocity is strong when you can build real relationships with other people, whether in person, on the phone or online. True connection is where you will find real value, not in building your Twitter followers with fake spam accounts that you bought on a sketchy Internet marketing forum. […]

Great read. I have a question i’m hoping you could help me with when it comes to using hotsuite twitter on the mobile app.

Is there a way to prevent hotsuite from “skipping” tweets when you haven’t updated the feed for awhile or so? It really doesn’t skip tweets b/c it gives you the “more option” to load the tweets that they are skipping. But that gets really tedious to do b/c you have to press the more button and then you have to scroll all the way down to the last tweet you have read that day.

I hope this makes sense.

I’m not too familiar with the HootSuite mobile app, I generally only use it from my laptop. If Connor gets an update of this new comment, he may be able to answer that question.

If I do find an answer for you, I’ll be sure to let you know 🙂