Facebook offers $50 of free Facebook Ads when you generate your first 50 Likes and then again at 100 Likes for your business Fan Page.

I have never been a paid advertising advocate, but lately I have been swayed using some free Facebook Ad dollars for a few clients. When you start a new Facebook page for your business, they offer you $50 free so you can try out the Facebook Ad platform. We decided to take advantage of the Facebook offer, free money!

To fully take advantage of the opportunity, I wanted to have a call to action beyond just Liking the Facebook page and also something to advertise for other than just a general brand message. In two cases, we went with Facebook contests with WildFire App.

Running the social media contest gave us something specific to advertise for and give people a reason to click through. It also gave us a way to capture Likes as well as email addresses to make the most of the Facebook ad dollars. 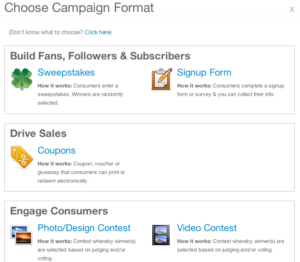 WildFire offers a handful of different social media contests that you can run with their easy to use interface.

Using WildFire to set up a social media contest is extremely simple. A few clicks and some title and description typing and your on your way to your first social media contest. The WildFire drag and drop interface made laying out the options for the contest very easy. When the contest was over, WildFire makes choosing a winner so simple that it is literally clicking a button that says “Choose Winner” and a winner from the contest is randomly selected. You can also select more than one winner.

In order to get the most out of our Facebook Ad spending, I set up the campaigns to be highly targeted.

When setting up the campaign, I selected a small geographical area, age group and chose to advertise only to people who like similar Facebook Pages (this part involved a little bit of research to find Facebook pages I thought were a good fit). This way I knew that anyone who saw the ad would be interested and that with a chance to win a contest, they would be incentivized to click and learn more. Not to mention that we are also providing value to the audience by offering a free prize.

Building Your Email List With A Social Media Contest

Using WildFire to set up a sweepstakes on the Facebook page and also embedding the sweepstakes on a web page (so mobile users would still be able to enter) made collecting email addresses and choosing a winner dead simple. The third-party social media application let’s you drag and drop form fields of whatever data you want to collect. In order to enter the sweepstakes, you had to give your email address. Anyone seeing an ad to win a free prize was now going to be entering our email list.

Using Your Email List To Drive A Social Media Contest

It wouldn’t be right to run a social media contest and not let your email list know about it. So we sent out an email announcing the contest with a link to the Facebook page. Now anyone who was on the email list and wasn’t a fan of the Facebook page yet, is now hovering over that Like button.

Since I don’t specifically have a background in PPC or online advertising, I was just doing my best with what I knew and learning along the way.

For our first client’s Facebook ad campaign and social media contest, we quadrupled Facebook Likes with the $50 we got free from Facebook. We considered this a success.

For our second client’s Facebook page, we ran an ad campaign optimized for impressions and collected 343 email entries and spent a total of $1.96. I would think this is extremely rare and a very lucky shot of the right targeting, prize offering and audience demographic, but this was definitely considered a successful social media campaign.

Have You Run Social Media Contests For Your Business?

I’d love to hear other stories and advice on how you’ve run social media contests for your business. Leave your experiences or thoughts in the comments below!