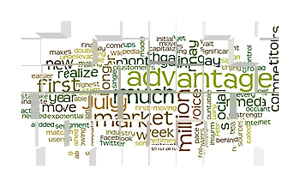 As time goes on, social media will become more utilized for business as consumers begin to utilize it more themselves.

The longer you wait, the more strength you’re allowing your competitors to gain by being there that much longer than you. It’s called the first move advantage.

The first move advantage is the sometimes insurmountable advantage gained by the initial or “first-moving” significant occupant of a new market segment. This advantage may stem from the fact that the first entrant can gain control of resources that followers may not be able to match. – Wikipedia

The day will come, in a week, a month, a year, when you realize you need to be capitalizing on social media and by then you will be that much further behind.

No social media competition yet in your market? Then it makes it that much easier for you to get in and dominate your market, making your voice the highest industry voice that your customers will hear. Then your competitors will be crying down the road in a week, month, year when they finally realize the mistake they made.