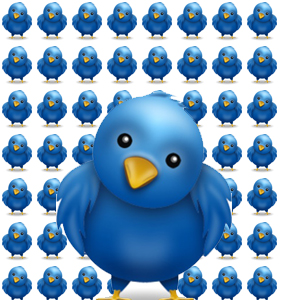 If you’ve been trying to get involved with social media and build your Twitter followers, you may be experiencing one of two things to get started.

1. Following a tonnnn of people hoping a lot of them follow you back. This makes it look like you have a lot of followers, which technically, yes you have Twitter followers, but you don’t have actual people interested in following you. You just have other people trying to increase that number on their profile page that are auto following or just blindly choosing to “follow” anyone who follows them. (And possibly doing the same yourself)

2. Living in Twitter purgatory with no followers while you Tweet your tail off to an empty audience.

If your goal is to have quality Twitter followers, then you can’t just go out and buy followers, you can’t just auto follow a bunch of people every day, you need to be providing value. The cost of being involved with Twitter, is sharing things that your target audience or peers are interested in. (To learn more about setting up your social media routine, read this article I wrote for Social Media Today: http://socialmediatoday.com/tresnicmedia/561729/6-steps-your-social-media-routine)

For example, I share tips and articles about web design and online marketing on my Twitter account so that people will follow me if those topics interest them. When someone lands on my profile and sees that I am sharing quality information that can benefit them, they then follow me with intent of reading what I think is important enough to share. If I wasn’t posting anything at all to Twitter, then what would be the point of following my account?

Now that you are giving people a reason to want to follow you on Twitter, how do you get them to even know about you? Since Twitter is open (except for the minority of people who keep their Twitter account private), you can mention (this means putting their Twitter name after an @ symbol, i.e. @tresnicmedia) anyone that you like. When you mention someone in a tweet, they will get a notification. This will usually grab their attention and have them take a look at your profile.

The best time to be mentioning someone on Twitter is when you share something that belongs to them, like a blog post that they wrote. So when you share their article, add their name at the end to give them credit. Why not even add in a “Thanks to @tresnicmedia for this article – ” so that they are then more tempted to reply with a “thanks for the retweet” or “you’re welcome, glad you liked it!”. Now when they Tweet back to you, everyone following them will see your name. Getting your profile in front of their followers will help you get more eyeballs on your Twitter account to see the value you provide and want to follow you as well.

Another good time to mention someone in a Tweet is if you link to something of their’s in one of your own blog posts and you want to let them know. Even better, you can Tweet at them asking permission to link to an article of their’s ahead of time. Then they’ll be anticipating your article and if it’s good enough, they’ll possibly even share it with their own followers!

Nice folks like Michael Brenner will take the time to shoot a quick Thank You tweet in groups to people who have mentioned him.

Don’t just jump in and start tweeting at industry leaders with 20,000 followers and expect them to notice you. They probably get hundreds of mention notifications a day and would be impossible to reply to everyone. If you went to a conference and tried yapping up the speaker while on stage, you’re not likely to get very far (more likely you’ll be thrown out). But if you look to industry voices that have a solid community around them but aren’t Twitter superstars, you will have a better chance at starting a conversation with them.

Consider creating a few Twitter Lists to help you segment out people who are more well-known than you are, but achieving their level of success is realistic for you in the near to medium future. This way you can easily keep up with information that they are sharing, retweet things you also find valuable and show them you are helping promote their brand as well. Reciprocity is strong when you can build real relationships with other people, whether in person, on the phone or online. True connection is where you will find real value, not in building your Twitter followers with fake spam accounts that you bought on a sketchy Internet marketing forum.

There are a million ways to skin the Twitter bird and build your followers, what are some ways that you have found successful? What about Twitter strategies you were advised on that didn’t work as well as you’d hoped? Share your Twitter experiences and advice in the comments below!