The NBA Social Media Awards: What They Did & What They Can Do Better 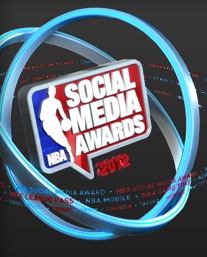 Courtesy of the NBA (We in no way, shape or form take credit for this graphic)

Last night was the first annual NBA Social Media Awards on NBA TV.  The one hour special was hosted by former Laker teammates Shaquille O’Neal and Rick Fox.  While social media was the focus of the show, I didn’t think there was enough fan interaction.  Only 3 out of the 10 or so awards given out last night were voted by the fans.  The other awards were based on most Facebook likes or Twitter following.

Utilizing a mega touch screen during the show, they were capable of showing viewers the teams with the most followers as well as individual players.  While this was a good idea, they could have shown more than just the top 3 teams/players.   For me personally, I would have liked to see the top 10 teams/players and the number of followers they have. I think it would have given some insight to who is the most liked in the league and maybe what these players are doing to interact with the fans. The players and teams always talk about the support from the fans so it would be nice to see how they give back.

What can the NBA do to improve their Social Media show next year?

Overall I think the first annual Social Media Awards were entertaining, but mostly because of the comedic duo of Shaq and Rick Fox.  I would rate the award show a 6.5 out of 10.  I look forward to watching again next year and seeing what NBA TV improves upon.  NBA has taken the lead in social media when it comes to interacting with their fans.  I think more leagues will follow in the footsteps of the NBA.